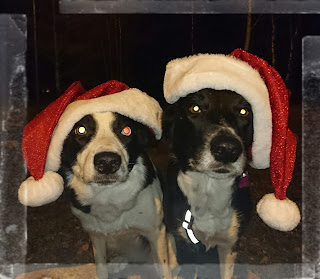 New has begun and new winds are blowing. I want to take look at the last part of the year 2016. Both girls had some brake from agility and we focused our work to other sport like obedience, rally and nosework. Our goal was to really get into the training and enjoy other sports than agility. This has been a very successful brake and we got lot of progress in all of the task we did.

First of course was a reaching of big goal in obedience which was to get a 1st prize result from the winner class (OB2 FCI). We finally did it with Freya on our Indenpence day 6th of December. Freya did wonderful job at trial even though we got a zero from stay. There was another dog that yelled before the task started and in the end came out of the ring. This was just too much for Freya and she stood up and went back down. So something we need to work on. Otherwise she did her work pretty well. Here is some video of her work in that trial:

I had some luck in the Clicker Expo and won the raffle at the Kong stand. My girls won 12 toys form the Kong company. This was an excellent prize. My girls just loved the prize. They have with us in training ever since. One thing I also got was a Wobbler which is a plastic toys that you can put kibble and dog has to push to get it out of it. The Wobbler was big hit Pixie and loves playing with it. Here is some video how it work. This was also first time she tried Acana new Kibble Cobb-Chicken Greens.


Our Acana Kibble Cobb-Chicken tasting went well with Pixie but my younger dog Freya didn't really fancy it.  Cobb- Chiken is grain free kibble that is one the new tastes in the series. Freyas favorite was the new Acana Classic Prairie Poultry. This food contained some oats but this seems to be ok grain for both of my girls and gives them carbohydrates to high speed performances like agility. Classic version has also freeze dried liver which might have been the winner taste for Freya. I liked it also that you could get bigger bags like 17 kg which is nice when you more than one dog at the house. We have tried bigger bags of both foods to my dogs but their favorite has been the Prairie Poultry. We will see what we should try next.

So new year has begun and lots new plans have been done. I will tell more about it later on. Next post will be update from my coach course with SAGI and from our Nosework Scent test tomorrow!!