Freya has been working on the tasks in OB4. It has been so much fun. First we started to work on the box task. Freya needed to learn to run straight to emptiness. I started to work on it with a foot target which I moved to different locations and distances. My goal was to make learn to focus her work straight forward and also to go as long I stopped her with cue or she reached the target mat. I also teach her to go straight to nose touch to wall. This training was to help her handle the situation where she need to run against a wall in small competition. So far my plan has worked out really well and she super focus when we do the forward sends. Time will tell what challenges are ahead. First will the markings on the ground. This will be our first distraction challenge.

I have done the running part separate from sending forward. I have put Freya straight in front of me and starting send to left and right to the box. Freya has finally got the idea of running in the middle of the box. She has been super. Her speed and accuracy has improved million times. It has so fun the work with her. Next is to back chain the two part together. She has learn this little change to the task really fast.

Going around with sit/down/stand and retrieve with jump

This task has been my favorite ever! So many little things to train. I have mostly trained the positions in the wood by going around the trees then I get easily few repeats with nice brakes. Having brakes between positions stops usually gives more quality to the work. Freya can to max of three super good stops. So if I want to keep them super I need train them as less as possible in one session. 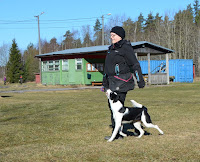 Other part has been the retrieve with the jump. First we have worked on retrieve part. Freya needed to learn to lift the dumbbell from down to up. She usually has pushed to dumbbell little on to the ground first and then picked it up. This created a problem that the jump came to fast to her and it didn’t look good enough. We started to work this problem by putting the dumbbell to little stool which she had to picked from to retrieve. It took only few tries and Freya started to change way she took the dumbbell to her mouth. I took this helped retrieve behind a jump from where we started work on rest on chain. Freya improved work superbly. I think we going to a right direction with this. Next step is to try all these chains together so little backchaining work ahead.

We have been working her technique a lot to make even better. I have done some body balance training and also work with the back legs. I have tried to improve the control in her body. It has started to pay off and she has done super work. I have done technique from close up from 5 m and then 1st changes from 20 m or more. So I’m trying to work the distance and control in separately. So far so good. I have also used a mat to get her better sense to keep her hind legs still. There are so many little things you can improve at the same time to work your way to the end goal. Years I have make me better at braking skills apart to make awesome together. We have still long way WC level work but it fun to try improve even the little things in our distance control.

Recall with stand and down

Recall has also a lot of element that need to be trained separately. Stops can be work on walks and also high speed recalls. Then we have try to make stops more interesting with recall game with two people where the dogs runs back and forward between two persons. Then you can make stop and give backround reward behind the dog. This little game has helped to make the stops even better. We usually do about 4-6 runs or less. This game is also a very demanding physically so better keep the repeats low to get high quality performances. More is less!

That's all for now!! I hope to get some awesome pics of Freya doing OB work because she is just a perfect ob princess <3