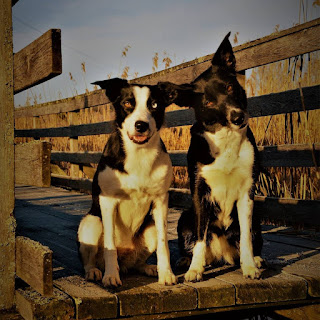 I have been working with both girls to get them ready for OB3 which is the highest class in FCI obedience. Both girls have worked on the send to straight which has been a bit of challenge task. Basic are pretty simple but there are just to many distractions to train for example the markings of the stopping circle. I have used a target and toy to get the send straight and with high speed. Freya has has a problem with toy that she starts to make a herding circle so needed to using to toy so much and have very black and white criteria that she needs to run straight. Pixie has learned to keep her head straight forward pretty nicely when I send her to target mat. Next face is to teach her turn stop 180 degrees. We will see how this projects goes.

Other new task has been the going around an object followed by a retrieve over a jump. Freya has already started to do the whole chain. Pixie has still some trouble of giving up the jumps. Both girls have pretty nice positions after going around. Freya has still some work with sit but otherwise work has been super. I have split the task in 3 different chains and tasks. I train the position takes in different situations like going around a tree or after doing an agility tunnel. I train separately the going around part to built it as tight as possible and last have direction retrieve with jump as last part of the chain. This task has been one coolest to train and has lots little things you can make better and better. Just love it! 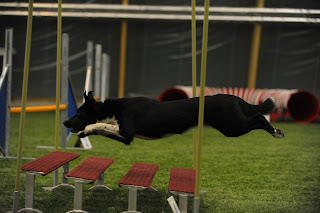 Agility has been a little down mode right now. I have had trouble of remembering courses and really have a good concentration. I have had take a little brake to find out how to set goals that don't make too much pressure to competitions. I have had a lock down in my head and I have tried to open it. Sometimes goal setting can make it difficult to find even a little positive things in your work. I hope we get this solved and start having fun again in competition and I would start remember the courses again.

In training we have done mostly running contact which have improved a lot. I have also noticed that Freya would need "a judge" running in training too. She sometimes gets little distracted when judges run next to her. She is sensitive dog and would need more variable training. My fault is that train a lot alone with my dogs so Freya won't get enough distraction training as she would need. Our next goal is to train more course work. I have been very lazy to train course work and we have done just skill improving. So we have to change a little bit how we train to make our work in competition more successful.
Posted by Marianne_A at 11:29 AM