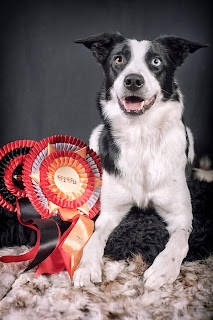 FIN AVA All Zet By All Means Freya


Freya finally got Finnish Agility Championship title! It took us almost 6 months from the day she could have got. We have had some bad luck and have lost it for 4 times. Same goes to our jumping sert but everything comes in time. I'm so proud of her and this year she has really grown to be super competition dog. We have still lot to learn but our team work has grown miles from last year. Freya got her last cert with a nice win in a big competition and on the same day she got her ticket National Championships in Lappeenranta. So she get to go to her first big competion before hit the road to Denmark and Dania Cup. I proud to show this little girl all grown up to her breeder Jane.

Next goal in our plans is to train for the obedience champion title. She has been so wonderful to work with. Our biggest challenges has been to sending forward but it's getting together piece by piece. I have used a target mat to make her run forward and then clicker for the running straight or rewarded for fast stop by the target mat. I have already started fade the mat away to make just run straight and not to take focus on something. I have also started a mission to make this task everywhere we go. I think I will use all the changes in our two week trip to Denmark and Sweden. :D

Some runs from Vantaa in May: 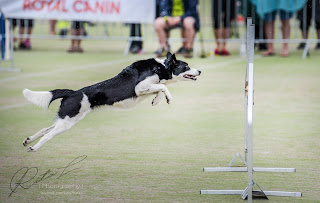 Both Pixie and Freya took part in National Championships in Lappeenranta. Freya started her work on Saturday by running part of Team Northern Agility Sports. She did a really nice run but missed a pull after dogwalk which made the run a DQ. I was very happy that she worked well even though the place was new and there were more crowd than usually. I don't have any videos from the weekend but cool photos by Rita Larjava. 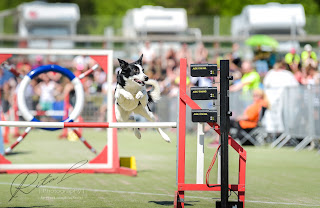 On Sunday we had individual championship. Freya dropped the wall so her run was done with that. We didn't really get back rhythm after that but she had nice parts. Pixie on the other hand took 10th place on the jumping course and ticket to the final. This was one the best runs she had ever made in the Nationals. In the final she dropped the double jump which I waited because it second jump and I had go a really far to next obstacle. I happy with the place in final and how fast she was. Pixie is really ready to rock the agility fields in Dania Cup.


Freya will also take part team tryouts next weekend. This will be her first tryouts. I hope that she fly like a wind as she has in the last few competition. I decided to leave Pixie out the try out and rest before trip to the Dania Cup. She has taken part many times in team tryouts but never got in to the second day. One par has always been on our way and to my opinion she is not longer a candidate to bring a medal home from the WC. More and more dogs have running contacts and it gives too much advance in time. Pixie is one the fastest dogs on the ground in Finland but her stopping contacts just puts her out the game. We will see if Freya rise to her level in speed. She has still some tricks to learn but she on her way to be pretty cool agility dog.

This fish based food came on at right time. Pixie had just dropped all her hair so I wanted to see how this food with oily fish would help her skin and coat to recover from shedding. Fat in this food is 38 %  which pretty high but should be good for skin and coat. Pacific Pilchard is a kibble that has a strong smell of fish to it. So the dog has to like fish. Both Pixie and Freya liked it. Pixie ate it mostly and I could she her skin and coat coming back it self more quickly than usual. I was very pleased how this food was digested. Grain free formula made it also very appealing food to use with my sport dogs. I also liked the idea that used to whole fish in production so there would be no fish material wasted. I could recommend this food to any sport dogs or dogs that have allergies ( this kibble has only sardines as source of meat).

Next is DANIA CUP in Denmark

Our next big thing is our two week trip Sweden and Denmark. Girls will take part to Dania Cup in Denmark which is week long agility event. This is first time both of them will compete in foreign country. Our trip also Freya puppy meeting so she will meet some of her siblings from all over the world. I just can't wait to meet them!!! I will write about our trip and all the experiences we have on our way. We will start our journey on Monday 3rd July with a cruise ship to Stockholm. I hope you enjoy our traveling blog.